More than 60 years of experience in Italy, over 75 years of experience in the U.S.A., a very high acquired know-how, a close co-operation with the customer, a production plant equipped with the most sophisticated machines and equipments which assure the greatest quality, a highly qualified staff, allow Topflight Italia to be the leader in the supply of:
It is the only Italian Company which produces its own adhesive materials and turns them out as a finished product. Topflight Italia can manufacture membrane switches according to the army requirements and rules and thanks to its high quality level, it has obtained the American UL homologation on its membrane switches. There are no limits in the application of Topflight products, which can be used in every field, from vending, to coffee machines, electromedical equipments, household appliances, aerial-naval field, electronic toys, army, electronic devices, machine tools etc.

The evolution and the success of Topflight Italia come from its capability to anticipate the market requirements, realizing customer’s ideas, intuitions and needs. The Technical Office carries out the project of the product, according to the customer requests and needs. A close co-operation between the customer and the company is established in order to realize a project which can fulfil the aesthetical needs and overcome any functional limit. The design, the graphics and the equipments are directly carried out by its specialized technicians, using the most sophisticated and advanced machines available, in order to assure a high quality during the printing process and the manufacturing of the product.

THIS IS THE MOST EXCITING CHALLENGE FOR US. 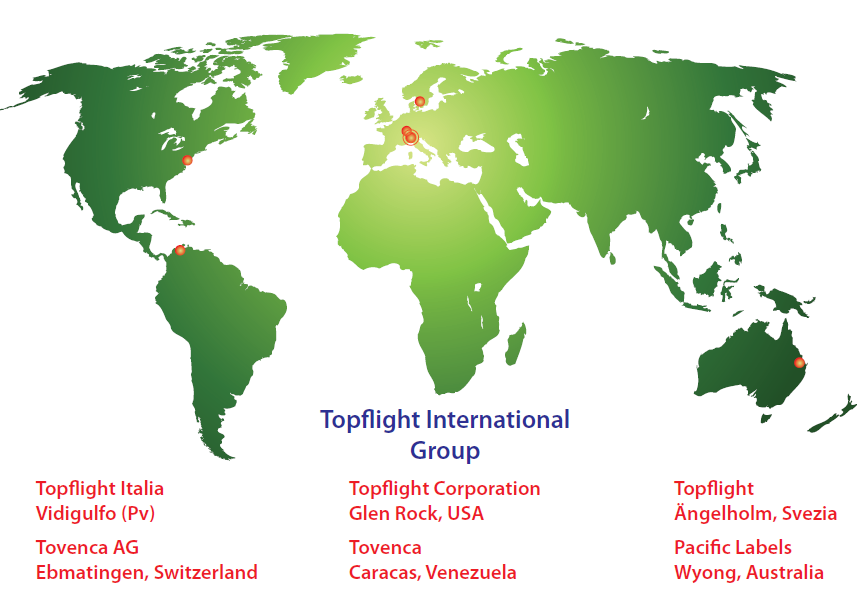 A SHORT HISTORY OF TOPFLIGHT…
During the Second World War, Topflight Corporation began its activity in York, Pennsylvania (U.S.A.), by printing adhesive tapes for the aeronautical field with machines designed and produced in its own workshops. A lot of time has passed since then, technology has developed and Topflight has contributed to this development, creating new materials, machines and techniques of production. The use of its products has gradually extended to all industrial markets, from packaging to electronics.

While Topflight grew technically, its commercial sector also expanded, opening new offices and plants in California and in 13 other nations among the continents of North America, South America, Europe and Asia. That is how, in 1958, Topflight Italia began its activity in Milan, taking advantage of the know-how and technical assistance of its American mother company and soon it obtained a footing in the national market.